Manitoba Conservation Interpretive events are free for everyone to attend! For more information on the tours of Bannock Point,
or to request a guided tour for your group or class, call the Park Interpreter’s office at 204-369-3157, email
Sloan.Cathcart@gov.mb.ca or visit us online at ManitobaParks.com.

NEAR NUTIMIK LAKE — In the summer of 1979, 15 prisoners, many of them aboriginal, were transported by helicopter to a remote area of Whiteshell Provincial Park for the purpose of building a steel fence.
It must have seemed a Fitzcarraldo-like endeavour. The prisoners didn’t have a clue why they were building a giant steel fence in the middle of nowhere, recalled Jack Steinbring, the former head of the University of Winnipeg’s anthropology department. There was nothing there except Canadian Shield.

In fact, the fence was the culmination of an 11-year fight led by Steinbring to protect the largest collection of ancient aboriginal petroforms — rock outlines of animals and geometric shapes, built in prehistoric times– in North America. People still recall meetings where Steinbring would pound his fist on the table arguing that the Whiteshell petroforms were sacrosanct.
“Every boulder is a prehistoric artifact,” he wrote in a published paper. “Its position must remain exact, and the lichen beds of the site must not be disturbed.”
The province finally relented. Steinbring arrived to lecture the prisoners about why they were building the fence. Some of them, particularly the aboriginal prisoners, showed empathy, he said. The 15 minimum-security prisoners spent several weeks constructing the steel fence that stretches at least a kilometer long.
It’s eight feet high with three strands of barbed wire strung across the top. It surrounds a nine-acre area called the Tie Creek Site. It’s a vast table rock from which one can see for many kilometres in any direction, according to one description. The petroforms inside are estimated to be up to 2,000 years old. The site is difficult to reach, requiring a hike of over six kilometers of muskeg and flooding, but that’s probably a good thing.
You don’t have to go to Tie Creek to see petroforms, however. It’s the heart of the petroform site but better known to the public is Bannock Point, which is open to tourists. You can see as many or more petroforms at Bannock Point with one difference. The petroforms at Tie Creek have not been disturbed.

Full Story can be found at:  https://www.winnipegfreepress.com/opinion/fyi/whiteshells-sacred-stones-126445578.html

Host your own group event in perfect Wilderness setting 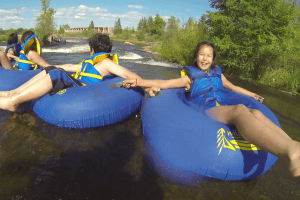 Weekend Retreats with meals from $99!

Sign up and receive access to special hosting offers and simple step-by-step process to create your best event yet!